Virtual reality training is being talked about as the way forward in football coaching. It provides the chance to fully immerse yourself in a Champions League match and is super-quick.

All in the Mind

The overall purpose of virtual reality football training drills is to train the mind to act swiftly. The virtual reality headset offers a variety of camera angles allowing a bird’s eye view for a coach to see his entire team or immerse himself in an individual player.

The difference in real-time on the pitch football training drills and inside a VR headset is that coaches cannot just spot mistakes but can correct them also, which makes for a finely tuned game. 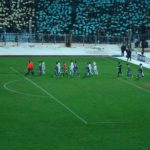 We all know that football training drills can help performance, and we are fast becoming aware that virtual reality training can have the same effect.

Sky Sports has been using a virtual reality system to help them with their analysis of the games they cover. Other systems allow players to actually play the game by putting on sensored shinpads and trainers; the experience is akin to playing the game in real-time and is proving to be popular amongst both players and coaches. There is also a neon ring which makes sure that collisions are avoided.

So let’s drill down! VR training includes firing balls from different locations, which helps to measure and increase speed as well as measure peripheral vision.

And It’s a Score!

Just like video games, VR training drills give scores out of 100. Typically, professional UK football players score in the region of 80, with some players reaching the magic figure of 90. The whole scoring system helps to encourage competition, which is at the heart of the game.

And it’s not just fancy footwork that VR training can help with: it is also a clever tool for spotting, for example, signs of concussion amongst players. Players who have been injured can return to pre-injury form by taking part in VR training without putting themselves at further risk of injury in real-time on the pitch. Interestingly too, it allows for young talent to be spotted and tracked.

But remember, VR training is supplementary, offering another valuable addition to on-pitch training.a